On top of the rock outcrop at Treshnish Point, situated on a rugged peninsula on the north-west coast of Mull, three rough concrete blocks once formed a level base for a boathouse’s timber roof. Three cast bronze hangers are fixed into these blocks, from which hangs three carved granite boulders, suspended at the end of thick bronze chains.

The carved boulders are marked with the points of the compass and each compass point has, at its centre, a metal roofing nail salvaged from the derelict boathouse. The boulders are hung so that when stationary, they are set to the orientation of the place, aligning with the North/South, East/West and S points of the compass. Lodestones ((or loadstones) are naturally occurring magnets and were used as the first magnetic compasses.

Each bronze hanger is named for a species of flora or fauna that is shared between Treshnish and the Treshnish Islands – the moth Silver Y, the plant Sea Mouse Ear and the bird Storm Petrel.

‘Lode Stones’ was created in 2012 by Matt Baker for the family that farm Treshnish, as an amplification the spirit of the place, and as a meditation on the connections between the Treshnish Islands and the farm. 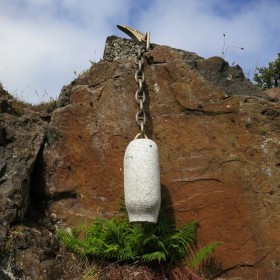 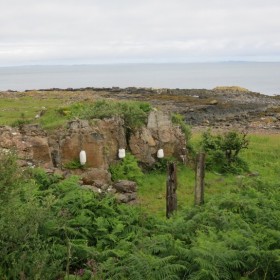 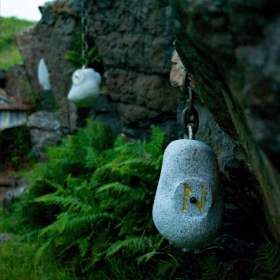 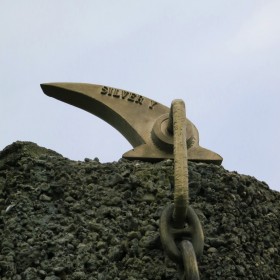 Remote location on private land but accessible to walkers with due care.