In the north-eastern fishing village of Balintore, Easter Ross, an eight-foot bronze mermaid sits atop a coastal rock in the sea and gazes back towards the shore.

Created by Stephen Hayward, this sculpture was commissioned by the Seaboard Initiative community group to mark the Highland Year of Culture in 2007. Four companion pieces are sited in the village and form the Seaboard Sculpture Trail, which celebrates the fishing heritage of the coastal communities of Balintore, Hilton and Shandwick and their strong historic links to the sea. The Mermaid’s origins are deep rooted in Easter Ross folklore; legend tells that once a fisherman stole a beautiful mermaid away to be his wife and hid her tail. Years later, after bearing his children, she found her tail and escaped back to sea, returning regularly to the shore to bring fish to her hungry children.

The Mermaid of the North is an iconic local landmark and is valued by residents of the village of Balintore due to the thousands of tourists it brings each year. Damage wrought by severe weather meant the original version was removed in 2013, and in 2014 a replica sculpture was recast as a replacement. 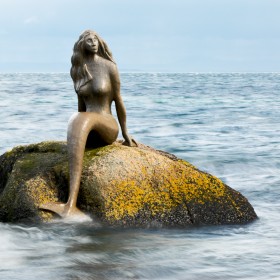 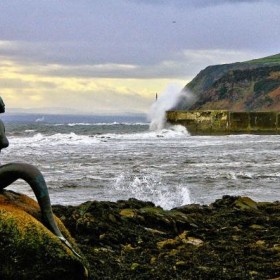