Scottish sculptor Kenny Hunter spent time in Sutherland researching the figure of the outcast in oral traditions, supported by a Scottish Arts Council Award. This period of research culminated in the realisation of his largest and most challenging public art work yet, set in a remote location in the far North West; The Unknown. At Borgie Forest The Unknown is physically distant from Scotland’s major population centres; so for many the journey, the context and the sculpture come together to define the outcome of this artwork.

The Unknown is made in nodal iron, a material which patinates to a red rust-like finish, sympathetic to the landscape palette. The articulation of joints in its skeletal form reminds us of 20th century artists such as Henry Moore and Barbara Hepworth who developed new forms though manipulation and abstraction.

Hunter researched his idea supported by a Scottish Arts Council award.  He developed the concept through a series of watercolours and maquettes. In his original proposal Kenny used photographs of wild landscapes to illustrate his thinking about remote landscape contexts; these included locations in Sutherland.  Timespan worked with Sutherland communities and individuals to host Kenny in a series of research trips across the area to identify the ideal location for a permanent work. A rocky knoll in Borgie Forest was eventually chosen, and the Forestry Commission Scotland kindly agreed to host the sculpture as a permanent art work. 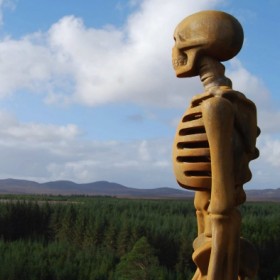 Public artwork accessible all year round.